SMG In The News

By Scott Scanlon featured in the Buffalo News

Workdays at Sheridan Medical Group start with "morning scrubs," brainstorming sessions where doctors, physician assistants and their health team gather to talk about ways to best serve the patients they will serve in the coming hours. A physical therapist, nutritionist, behavioral therapist and other workers on the 32-member staff also likely will attend. 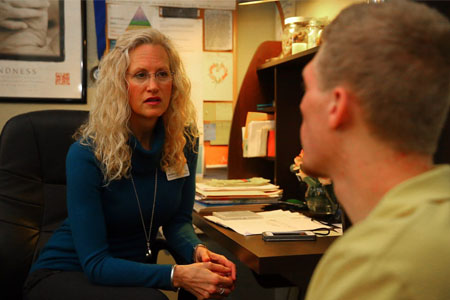 Doctors here have been trained to ask more questions, spend a bit more time with patients, and send them down the hallway to talk with preventative health specialists, including physical therapists in the medically oriented gym.

"We believe that we are creating the model for the future," said Jennifer Carlson, clinical director of the Town of Tonawanda practice. "I think this sort of interdisciplinary team is really essential. What we know is what's been happening in the past – a physician making decisions on behalf of a patient – has failed. We know we in the U.S. have the sickest population that's costing the most amount of money in the entire developed world."

Dr. Richard Carlson Jr., an internist and geriatrician, and Dr. Rajiv Jain, board certified in pediatrics, internal medicine and sports medicine, launched Sheridan Medical 11 years ago. Both doctors have trained and practiced in Buffalo and far-flung places, including Africa. Their fathers were both doctors.

They've enlisted help from their wives in establishing a Sheridan Drive operation that looks to provide cradle-to-grave, community health services in the same building – in a patient-centered way.

Aanchal Jain, who has a finance background, is director of business operations. Jennifer Carlson is tasked with making the operation click.

"I see the world through the eyes of a social worker," said Carlson, a graduate of the University at Buffalo School of Social Work who has worked three decades in the field. "Social workers have their roots in transformation. They've been agitators and have sort of an incendiary role because they're sympathetic to the needs of individuals. They are trained to be good communicators and relationship builders – and to perceive shortcomings, problems and challenges, then to bring to bear various kinds of forces to help a system become more responsive."

It has been a challenge, she said, but the staff looks to help change health care in Western New York as it goes about its work.

Q. This sounds quite a bit different than the top-down medical care many patients know.

If you can't think differently about your role in the lives of patients, you're never going to change the way you're practicing medicine. Patients are going to continue to become overly dependent on you and they're not going to take their responsibility seriously. It's way too easy to take a back seat and let somebody else run the show. You need to make it harder for people to not be in control. If you stop being in control, they can start to pick up the slack…

Doctors' offices have historically had a bunch of exam rooms and a receptionist and a waiting room. That's it. We need teaching spaces, places where people can confer. Our reimbursement doesn't match what we know we need to be doing. We're getting paid to take care of diseases. Eighty percent of our reimbursement is dedicated to fee for service but our practice is deeply invested in population health management. We're banking on that flipping and we're going to be ready.

A huge amount of my time is dedicated to teaching the staff and the patients to think differently about care from a preventative standpoint – and to take themselves seriously as a member of a team. Historically, all of our nurses and our medical assistants and our dietitians were cued to take orders from the doctor. The doctor has a lot of knowledge about overall health but they don't really know a lot about nutrition. They're very bad social workers. This is not a secret. Our doctors have heard me say this to them. But they're great doctors. Great doctors. It's almost as important knowing what you don't do…

That team approach matters. Physician satisfaction has gone down the drain. They're working 18-hour days. Their reimbursement rates are lower than in the past. Their document burden is incredible. People should know that.

The whole reason reform came into being is that we are sicker than any other country in the entire developed world and we're putting huge amount of money – way more than anybody else – into maintaining sick people. Our strength as a team is helping not only with medication but poor eating habits or stress management.

Q. You say insurers could be more helpful?

We're absorbing part of the cost to develop the model. People who work here know what works and what doesn't, and how to collaborate, yet there's no reimbursement structure to support some of what we do. … Insurers know that to prevent that 80-year-old on multiple medications and with complex health issues from falling, it's really critical they be seen and be given a suitable fitness program. Sending them to the Y is not the same thing as being seen by physical therapist Russ Certo and his team (but he can't get traction with insurance companies on reimbursement). Getting someone in to see a dietitian so we can create a menu that's suitable for whatever it is they're struggling with, rather than have them become diabetic ... would be better but the system is not designed to reimburse those services.

Our goal is to be an equal opportunity employer and deliverer of health care.

Please let us know how we are doing and what we could be doing better.

To contact the doctor outside of office hours please call 716-332-4476 follow the prompts. In case of emergency please call 911.

Our office is available for appointments:

Due to the current COVID-19 outbreak, we are temporarily suspending walk-in hours in an effort to prevent further outbreak of this disease. Please visit us on your Patient Portal or call us by phone if you are not feeling well.

If you have comments or feedback, please click the button below