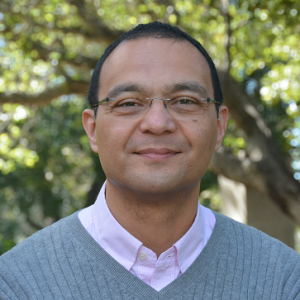 Are We Born Racist?

Rodolfo Mendoza-Denton, PhD, professor of psychology and Richard & Rhoda Goldman distinguished professor of social sciences at the University of California, Berkeley, co-edited the book Are We Born Racist? New Insights from Neuroscience and Positive Psychology. A frequent contributor to Psychology Today, Mendoza-Denton has published groundbreaking research on bias, stereotypes, and prejudice. He is also faculty advisor for the Greater Good Science Center, which studies the psychology, sociology, and neuroscience of well-being, teaching skills that foster a thriving, resilient, and compassionate society.

Are We Born Racist?

Rodolfo Mendoza-Denton, PhD, professor of psychology and Richard & Rhoda Goldman distinguished professor of social sciences at the University of California, Berkeley, co-edited the book Are We Born Racist? New Insights from Neuroscience and Positive Psychology. A frequent contributor to Psychology Today, Mendoza-Denton has published groundbreaking research on bias, stereotypes, and prejudice. He is also faculty advisor for the Greater Good Science Center, which studies the psychology, sociology, and neuroscience of well-being, teaching skills that foster a thriving, resilient, and compassionate society.

With so many disturbing examples of racism in the news lately, we turned to Mendoza-Denton with some questions about the nature of prejudice, and how to overcome it.

The question you ask in your book remains apt. Are we born racist?

Research shows that human beings have a natural proclivity to make distinctions between “us” and “them.” That natural proclivity has a survival value. You want to know who to trust and share resources with, and who is your enemy. From an early age, we show our natural tendency as social creatures to pay attention to the cues that our caretakers pay attention to. And we have very sensitive pattern detectors toward other humans. Let’s say as a child you had a scary experience with Santa Claus. That might make you feel uncomfortable with anyone with a white beard later in life. John Watson demonstrated this phenomenonwith his famous test subject "Little Albert" in the early 1900's.

Are there any positive functions that come out of prejudice?

To make claims about whether an evolutionary behavioral tendency is adaptive in the present day is always a dangerous proposition. But you can certainly say that the biases and prejudices we have make the world simpler, in the sense that we don’t have to have think quite as hard about who to trust and who not to trust. They give us a predetermined schema to make sense of the world. But especially in a multicultural society like ours, prejudices are often very limiting and very harmful. They may give some people a simpler view of the world, but it comes at great cost to the people who are their targets.

You have researched the health effects of prejudice and racism. What have you found?

Bias, discrimination, and intolerance also have negative consequences for the people who are prejudiced against certain people or groups. Interacting with people they feel prejudiced toward can be highly stressful and anxiety producing. People who are intolerant may feel uncomfortable on some level about their biases, which adds to the anxiety. Intolerance often manifests itself in anger, and we know that anger has significant health consequences. We use the term “unhealthy racist” in our book because racism really can be hazardous to your health.

Is there anything we can do to minimize or eliminate our prejudices?

The first thing to understand is that the “in-group” and “out-group” distinctions that we talked about before, that define “us” and “them,” are highly malleable. Whether it’s race, class, religion, gender, or sexual orientation, research shows that the specific identities that we are prejudiced toward or against can change.

That’s an important finding. A few years ago, research that made headlines seemed to suggest that we are hardwired to be racist. Scientists found that when research subjects were asked to make distinctions between photos of black and white faces, a part of the brain called the amygdala lit up. The amygdala is part of the limbic system, an evolutionary early part of the brain, so the findings seemed to show that biases are a very basic, primitive response. But we’ve since discovered that the amygdala lights up when people are asked to make almost any kind of socially relevant distinction, positive or negative. When research subjects are asked to distinguish between team members and nonmembers, for example, the amygdala lights up. So the current scientific understanding is that we’re hardwired to make distinctions that are helpful in navigating our social world, but not to be racist per se.

What sorts of things can change our biases and prejudices?

Familiarity breeds liking. The more often and consistently people experience one another through inter-group contact, the less likely they are to be influenced by stereotypes and prejudices. Some of our prejudices arise simply because we don’t have experience with other groups. We never have the chance to disconfirm our faulty stereotypes. People may hold on to all kinds of stereotypes about Hispanics, or African Americans, or gay people, but when people spend time with them, they discover—imagine that—that members of the “out” group are a lot like members of the “in” group. And the positive benefits of experiences like this may go beyond the individuals involved. If I tell a friend of mine who happens to be biased against gay people that a co-worker I admire very much is gay, for example, that friend is likely to begin to question his or her own prejudices. That’s called the extended contact effect, and it can be quite powerful.

The discouraging news is that our society is structured against this kind of mixing of groups. We continue to be segregated by class and status, and it’s very easy for people to avoid contact with others who aren’t like them.

Absolutely. The Obama presidency—the very fact of having elected a black man to the highest office—has changed the landscape of possibility for many people. Having women in leadership positions changes people’s attitudes and perceptions about women. Having someone you admire in public life speak out against prejudices can help shape your own attitudes. Public laws are also hugely influential. Laws in favor of gay marriage, for example, signal a cultural position with respect to certain differences. They signal a social norm, establishing the way our society thinks about certain issues.

What can we as individuals do to become less prejudiced?

We can try to broaden our contacts to include people who aren’t like us. That sounds simple, but it’s not. It’s very hard because the structural barriers are so high. Let me mention an interesting finding from studies of young children. The most popular kids, researchers have found, have the most diverse social networks. They’re friends with everyone. But as those kids get older, they lose that diversity in their social networks. Why? Because there’s so much peer pressure.

So it’s important to reach out and try, very deliberately, to be inclusive in our friendships, our relationships. Unfortunately, as egalitarian as those impulses are, they can end up backfiring because they objectify or don’t go deeply enough. One has to be really careful and really genuine. If you find yourself thinking, “Miguel, my Mexican friend,” that in itself can be a problem, because he’s your Mexican friend instead of just your friend.

One strategy is to find points of contact that are not focused on differences but on things you have in common. Music is a good example. And for me, interest in sports is another great example. It’s a lovely way to bring a diverse group of people together, based on our love of soccer, or basketball, or yoga.

The more of those kinds of activities we can find­—opportunities to interact with groups of people we wouldn’t otherwise encounter—the less prejudiced we’re likely to be.

Our goal is to be an equal opportunity employer and deliverer of health care.

Please let us know how we are doing and what we could be doing better.

To contact the doctor outside of office hours please call 716-332-4476 follow the prompts. In case of emergency please call 911.

Our office is available for appointments:

Due to the current COVID-19 outbreak, we are temporarily suspending walk-in hours in an effort to prevent further outbreak of this disease. Please visit us on your Patient Portal or call us by phone if you are not feeling well.

If you have comments or feedback, please click the button below